The Truth About Solar
For a long time, solar power has been very much hated from a cost-benefit standpoint but things are starting to turn around for the technology. Around the world, progress is being made to make solar power a viable alternative. 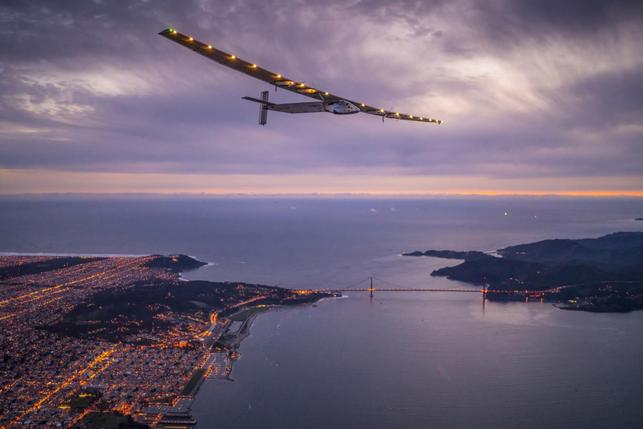 A solar-powered airplane midway through a historic bid to circle the globe completed the 10th leg of its journey on Monday, landing in Arizona after a 16-hour flight from California, the project team said.

The Swiss team flying the aircraft in a campaign to build support for clean energy technologies hopes eventually to complete its circumnavigation in Abu Dhabi, where the journey began in March 2015.

The spindly, single-seat experimental aircraft, dubbed Solar Impulse 2, arrived in Phoenix shortly before 9 p.m., following a flight from San Francisco that took it over the Mojave Desert.

The flight would have taken a conventional airplane just two hours, but the solar craft's cruising speed, akin to that of a car, required pilots to take up meditation and hypnosis in training to stay alert for long periods.

Occupying the tiny cockpit for the trip was project co-founder Andre Borschberg, who alternates with fellow pilot Bertrand Piccard at the controls for each segment of what they hope will be the first round-the-world solar-powered flight.

"I made it to Phoenix, what an amazing flight over the Mojave desert," Borschberg said in a Twitter post.

Borschberg was the pilot for the Japan-to-Hawaii trip over the Pacific last July, staying airborne for nearly 118 hours.

That shattered the 76-hour world duration record for a non-stop, solo flight set in 2006 by the late American adventurer Steve Fossett in his Virgin Atlantic Global Flyer. It also set new duration and distance records for solar-powered flight.The feat, however, dealt a setback to the Solar Impulse, which suffered severe battery damage, requiring repairs and testing that grounded it in Hawaii for nine months.

Piccard completed the trans-Pacific crossing last month, reaching San Francisco after a flight of nearly three days, more than three times the 18 hours Amelia Earhart took to fly solo from Hawaii to California in the 1930s.

The biggest difference is that the propeller-driven Solar Impulse flies without a drop of fuel, its four engines powered solely by energy collected from more than 17,000 solar cells built into its wings.

Surplus power is stored in four batteries during the day, to keep the plane aloft on extreme long-distance flights.

In a precursor of their globe-circling quest, the two men completed a multi-flight crossing of the United States with an earlier version of the solar plane in 2013.

If You Need Any Convincing That Solar Roadways Are The Future, This Video Will Help

This new one from creator Scott Brusaw, however, most definitely does not make this mistake.

“Solar FREAKIN’ Roadways!” is filled with passionate excitement and specifically targets young adult minds while explaining the capabilities of this invention, which may seriously be the key to the next stage of human evolution.

All Brusaw’s need is a little cash and we can kiss economic woes, pollution and a whole lot of car accidents goodbye forever.

Years ago, when the phrase "Global Warming" began gaining popularity, we started batting around the idea of replacing asphalt and concrete surfaces with solar panels that could be driven upon. We thought of the "black box" on airplanes: We didn't know what material that black box was made of, but it seemed to be able to protect sensitive electronics from the worst of airline crashes.

Suppose we made a section of road out of this material and housed solar cells to collect energy, which could pay for the cost of the panel, thereby creating a road that would pay for itself over time. What if we added LEDs to "paint" the road lines from beneath, lighting up the road for safer night time driving? What if we added a heating element in the surface (like the defrosting wire in the rear window of our cars) to prevent snow/ice accumulation in northern climates? The ideas and possibilities just continued to roll in and the Solar Roadway project was born.